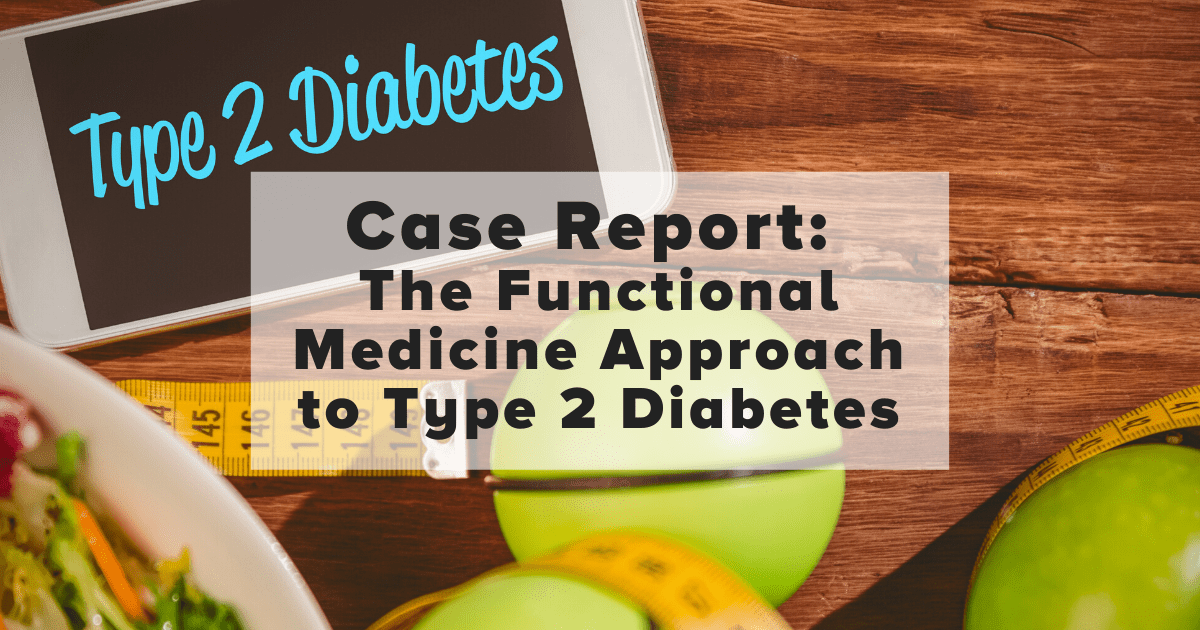 I wanted to take the time to present a case of type 2 diabetes and how I went about treating it using the Functional Medicine approach.

So the important labs are fasting blood sugar, of course, or fasting blood glucose, you’ll hear it said that way as well, fasting insulin, and the hemoglobin A1C, which is a three month marker of what your blood sugar has been doing. Those are the three key measurements when I’m looking at blood sugar balance. Then there’s also some other markers that are important as well. Of course, making sure that the person has good inflammation control.

So I will look at the high sensitivity CRP, C-reactive protein, which is an overall marker for inflammation. And I will also take a good look at their lipid profile. And in particular, I am going to be looking at their triglycerides as far as blood sugar balance goes because carbohydrate and sugar intake is definitely correlated with the triglycerides in most cases. So those are the key numbers for just blood sugar control and blood sugar balance, in evaluating someone with type 2 diabetes.

In functional medicine new patients get all the labs, right? They’re going to get to see what’s going on with adrenal, thyroid, sex hormones, and all of their nutrient levels. They’re going to get to see, obviously, what’s going on with blood sugar and cholesterol and kidney function and liver function, and some chronic infection status and toxins. There’s so much we look at in functional medicine. And a lot of it actually does play a secondary role in diabetes.

For example, if someone’s vitamin D level is low, that can affect blood sugar balance, as can zinc, as can chromium. And I could go on and on about toxins and their effect on blood sugar as well. So a lot of the labs we do play roles in management of type 2 diabetes in getting to the bottom of the root causes, right? Like what turned on type 2 diabetes? Which of course, in many cases, is lifestyle related, right? It has having to do with what that person’s eating, so it has to do with nutrition, has to do with the exercise and movement, or usually lack thereof, in the case of type 2 diabetes. Also has to do with how that person’s sleeping and their stress levels. And again, their toxin exposure, as I was just mentioning.

So in this particular case, this is a 74 year old woman that presented with an initial lab finding of a hemoglobin, A1C of 7.3%. So what that means is her three month marker for blood sugar was definitely elevated and it was in the actual diabetic range, not pre-diabetes, diabetes. When it’s above 6.4, you’re actually considered diabetic. Her fasting insulin level was at a 25. Fasting insulin, insulin will go high when there’s a blood sugar balance problem, because remember insulin’s job is to help lower blood glucose, right? So when blood glucose is high all the time insulin is going to go high to try and lower it. So fasting insulin was 25 at that time. And her fasting blood sugar was 142.

And her initial, again, to review, fasting blood sugar was 142. Fasting insulin, 25. Hemoglobin A1C, 7.3. Other numbers I looked at that were key in this case where her triglycerides, which were 133. So not technically high because the lab will say 150 is high, but below 100 is considered more optimal. And her CRP or C-reactive protein, which is an overall marker for inflammation, was elevated at 3.9. Now there were a bunch of other labs that I checked. I did find a whole host of nutrient deficiencies, including vitamin D, zinc and selenium in her particular case. And so obviously we’re working on replacing all of those and working on lowering inflammation and whatnot.

So the key, how did I treat her? What did I tell her to do? I put her on a low carbohydrate paleo nutrition plan and got her moving. So I got her walking daily, so she’s walking about two miles every single day. Got her sleeping better because through taking a good history I learned that sleep was a huge problem for her. So I got her on some adrenal adaptogens to really help manage cortisol and help her to sleep more soundly. She was already doing a pretty good job with toxins in her personal care products and household products so that I didn’t need to intervene too much there. So really, nutrition and diet and sleep, those were the main things, and her exercise and movement, those were the main things that I was intervening on.

So four weeks, again, of being on a low carb paleo plan, walking two miles a day, sleeping more regularly, on nutritional supplements to support blood sugar balance and replace the nutrients we found were deficient. And in four weeks her hemoglobin A1C came down to 6.5. Her fasting blood sugar went from 142 down to 125. Her fasting insulin went from 25 to 19. Her triglycerides went from 133 to 71 and her CRP, or C-reactive protein, went from 3.9 down to 2.0. Again, this is in four weeks’ time. These are remarkable results even for someone who would be placed on medication, right? So this is a significant result.

So I just want to just share this case with you. And I’m going to be sharing more cases with you over time because just highlighting what the functional medicine approach can do, finding and treating the root causes of whatever issues are going on is what we’re all about. And this person did not take any medication for diabetes at all. This was all lifestyle change. Oh, and by the way, just a few days ago, she had to cut her blood pressure medication half because she’s also doing so well there. { And she also lost 20 pounds}.  So this is Dr. Emily Parke with your Functional Health Minute for today.

Read all of Dr. Emily’s latest updates to stay informed about ways you can upgrade your approach to wellness.
No spam, notifications only about new products, updates.
PrevPreviousHow To Properly Use Gloves for PPE
Next6 Acupressure Points for Immune SupportNext