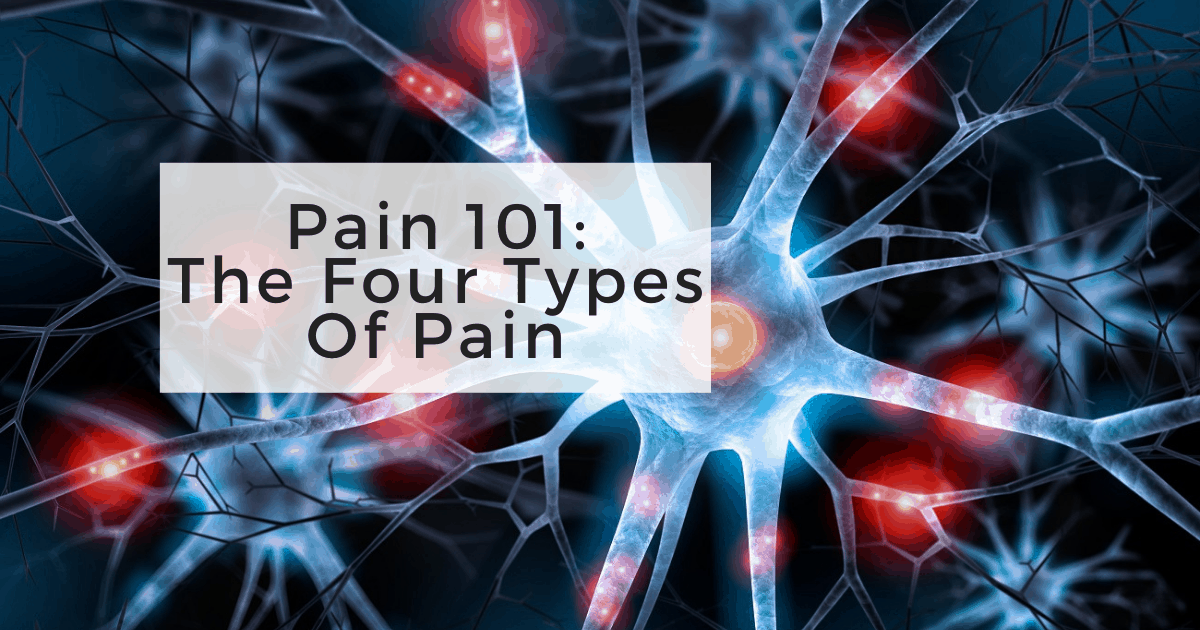 In this functional health minute, we're going to discuss the four types of pain and how autoimmune disease may trigger each one.

Hi, this is Dr. Emily Parke. In this next Functional Health minute video, I’m going to continue on talking about pain. In my last video, we talked about pain signaling and how it works, and we briefly discussed the different types of pain.  In future videos, we will discuss how to treat pain naturally.

We are going to review the four main types of pain.  Nociceptive pain, which results from physical damage. So that includes things like injuries and surgeries. Most people kind of understand that basic type of pain. Then there’s dysfunctional pains. So those are the things like CRPS, which is complex regional pain syndrome and other types of what are considered functional type pains. Anytime the word functional is used in traditional medicine to describe pain, it’s talking about a pain that there is not another diagnosis for, meaning they’ve done a workup, there’s no physical damage they can see, there’s no other disease diagnosis to describe it. So you may hear someone diagnosed with something like, for example, functional abdominal pain. It just means they have pain, but there’s no other diagnosis so the treatment then becomes a little bit obscure because there’s not a really good root cause.

Then the next type of pain is neuropathic type pain. And that is also considered nerve pain. And there’s a few different reasons why someone could have neuropathic pain. Nerve pain or neuropathic pain can be caused by an injury to a nerve, of course. And that can happen centrally, like in the brain, or it can happen more peripherally, like out in the peripheral nerves, for example, but it can also be caused by things internal, like diabetes. We’ve all heard of diabetic peripheral neuropathy where diabetics will start to kind of lose the sensation in their hands and feet. And then there’s other reasons too, like nutrient deficiencies, for example, some of the B vitamins like B12 and folate, even B1 and B2 can also cause some neuropathic type pains if they’re really deficient.

And then of course there’s inflammatory types of pain. So this type of pain is anything that has an it is at the end of it, and then there’s other causes of inflammatory pain too. But if it has an it is at the end of it, it by definition means inflammation. So we’re talking about things like rheumatoid arthritis, psoriatic arthritis, ankylosing spondylitis, lupus, scleroderma, Sjogren’s syndrome, ulcerative colitis, Crohn’s disease, celiac disease, but it can also include other things you might not really think of in association like Hashimoto’s thyroiditis, for example. And then there are many other autoimmune conditions that can contribute to pain. I would also actually put fibromyalgia in this category as well. There’s some more recent research putting it more in an autoimmune disease category.

So in functional medicine, obviously we have huge roots in nutrition, sleep, exercise and movement, stress management, and toxin reduction. And nutrition can really play a big role in a couple of different types of pain. Like obviously if you have a nutrient deficiency and that’s the cause of your neuropathic pain, we need to replace those nutrients. But food sensitivities can also, for example, cause and trigger inflammatory pain. I have a lot of patients who will have an increase in joint and muscle pain if they’re off their diet plan. And by the way, there’s not one perfect diet for everyone, but there are a couple of diets if someone is struggling with pain, especially pain of autoimmune disease origin, that can be really, really helpful. I do like to use at least a paleo approach, if not a paleo autoimmune protocol, because the autoimmune protocol takes out certain foods that are known to be inflammatory and contributory to joint pain.

Now is everyone that has pain, do they need to be on a paleo autoimmune protocol? No. Does it work for 100% of people? No. Does it work for a majority of people to at least reduce some of their pain? Yes, it does. And just honestly just cleaning up the diet, even if you don’t end up going on a full paleo or full paleo autoimmune protocol, can really make a big difference in pain. If you think about it logically, not putting in ingredients that are inflammatory like highly processed and packaged foods, fast foods, fried foods, things like that, it can make a big difference for you.

And then of course, besides, the basic foundational functional medicine lifestyle factors that I just briefly talked about, we want to also look at advanced laboratory testing. So obviously we’re going to look at all the basic things like your kidney and liver function and your blood counts and blood sugar, cholesterol, all of those items. But we’re also going to get really deep into nutrient deficiencies, toxins, chronic infections, what’s going on with all of your hormones, and some advanced testing to see if there is an autoimmune disease lurking there.

With any autoimmune disease we also want to really figure out what are the triggers that got you there to begin with. So there’s a lot of people that are predisposed genetically to be more likely to get an autoimmune disease. But that doesn’t mean you can’t do anything about it. So the genetics, that’s your risk factor, but the environment that you put yourself in really plays a huge role in how that disease process is going to play out. So if we can get really good control over all of your lifestyle factors, figure out what the triggers are for your pain and or autoimmune disease, then we’re going to be able to make good headway.

This is Dr. Emily Parke with today’s Functional Health Minute.

Read all of Dr. Emily’s latest updates to stay informed about ways you can upgrade your approach to wellness.
No spam, notifications only about new products, updates.
PrevPreviousBlueberry Walnut Keto Smoothie
NextPain 101: How We Treat PainNext