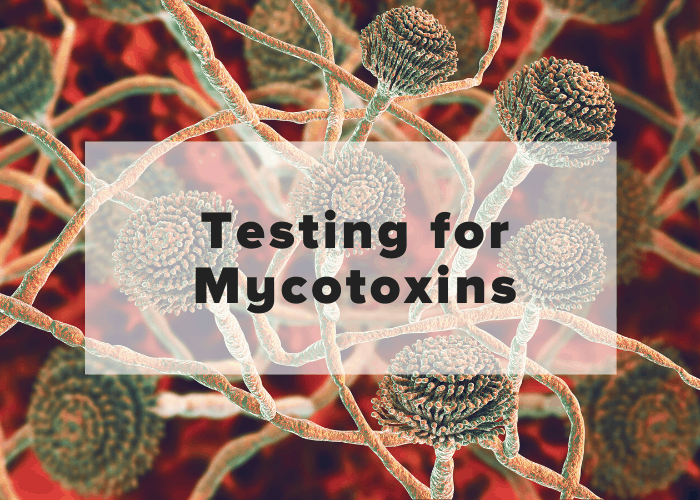 Mycotoxins may be the hidden cause of your suppressed immune system. Fortunately, there are some tests we can perform to test for these metabolites.

Hi. This is Dr. Emily Parke with your next Functional Health Minute. I am continuing my testing series, and so I’d like to next go over what a mycotoxin test looks like. Mycotoxin is a test for mold metabolites. It’s to test to see if you have actual metabolites of mold toxins in your body, and it is collected by a urine sample, by the company Great Plains. That’s who I like to use, and it gives you a report for six different categories. There are different metabolites for each different type of mold. In this example, this person is definitely exposed to the mold Aspergillus because they have very high levels of Ochratoxin A, and they have moderate levels of Gliotoxin.

For example, Aspergillus, the mold Aspergillus, exposure can come from water damaged buildings, but it can also come from certain foods, especially the Ochratoxin A. There’s foods, like grains for example, some of the nuts and seeds, especially peanut butter is known for having Ochratoxin A contamination. Anything stored in a silo, like corn for example, can also have some Aspergillus growth fairly easily. But again, water damaged buildings, or can be also be coming from food mold as well. Then the next category down is to look for exposures to the Penicillium species of mold.

That can also sometimes can be coming from food but also can be coming from water damaged buildings. The next one is for something called Stachybotrys. Stachybotrys is known as the toxic black mold, and if there’s exposure to that, you definitely want to figure out where it’s coming from. That one really is only coming from water damaged buildings. So you really want to figure out where your exposure is, whether it’s in your home, or your office, or school, or your gym, or wherever it is that you spend a fair amount of time that is likely to have mold.

Now, you can also besides testing for mold metabolites in your body, you can also test your environment. There is a completely separate company that you can order a testing kit online from them, fro www,mycometrics.com, and you can get something called an ERMI score, E-R-M-I, ERMI score, and that will tell you how moldy the area is you tested relative to all the rest of the homes in the United States. That’ll give you an idea of where your mold exposure might be coming from. Is it like I was saying, is it home, is it work, is it school? Where is the toxin exposure coming from?

A lot of the mycotoxins are toxic to the immune system and to the central and peripheral nervous system, so this is where you’re going to have things like potentially low white blood cells, or a suppressed immune system, tend to get sick all the time. A lot of times mold exposed people will have allergies that never seem to go away. Now, there are people that have allergies that are not mold exposed. Plenty of people out there. But I’m just saying if it’s a newer development or came on suddenly, you might think of mold exposure. The peripheral and central nervous system symptoms can be quite significant as well. You can get things as generic as fatigue, and muscle weaknesses, and sensations like tingling, and numbness, and whatnot.

But you can also get spasms, and tremors, and some other more significant neurological symptoms as well, and so you definitely want to decrease your exposure to mold. When we do have someone that’s mold exposed or exposed to any environmental toxin, of course there’s a detoxification protocol and process that we go through once you have removed the exposure. So I would not put someone through a full-blown mold detoxification protocol until they are definitely not mold exposed anymore. It doesn’t mean we do nothing in between now and the time that they get taken care of, but it does mean that we’re going to have more work to do after the exposure is cleaned up. This is Dr. Emily Parke with your Functional Health Minute for today.

Read all of Dr. Emily’s latest updates to stay informed about ways you can upgrade your approach to wellness.
No spam, notifications only about new products, updates.
PrevPreviousEnvironmental Toxins Testing
NextHow to Properly Wear a MaskNext