Review of the Organic Acids Test 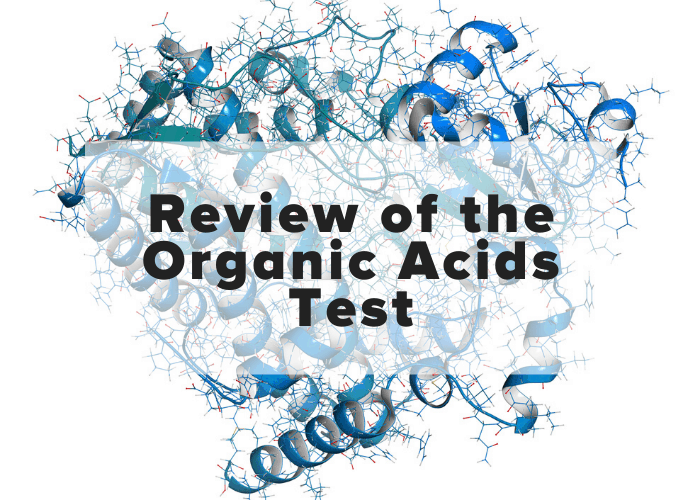 Today I'd like to go over an advanced functional medicine test called the organic acids test (or OAT) and the metabolites it analyzes.

Hi, I’m Dr. Emily Parke with your Functional Health Minute for today. Today I’d like to go over one of the tests that I use here at Arizona Wellness Medicine. It is an advanced functional medicine test. The name of the test is called an organic acids test (or OAT). And what it is, is it uses a urine sample to get a bunch of metabolite data. And I’m going to kind of pull up a sample report and go over the different categories of information that we gained from doing this particular test. And at future Functional Health Minutes, there’ll be other testing modalities that I’ll go over as well.

So, this is from Great Plains, that’s the name of the laboratory company and again, it’s called an organic acids test, and if you get a large number of metabolites on this report, over 70 metabolites to be exact. So I’m going to start from the very top and go over the different categories. So the first nine markers on this test are for yeast and fungal overgrowth, and this company is actually very good about separating the two. And I know it’s backwards on the view, but what you can see is there’s writing in red here for something called aspergillus, which is a type of a mold and that one can actually be found in foods as well as being exposed from a water damaged building.

So, and then the other markers are for actual yeast overgrowth and the most common marker that is high when there’s a yeast overgrowth problem is one called arabinose. And so the first set of markers here are assessing for basically yeast and fungal mold overgrowth. The next set of markers is looking at things for bacterial overgrowth and they’re just general markers, and some of the markers are going to tell us about healthy gut bacteria as well. And then this set of bottom markers is actually for something called Clostridia. So Clostridia is a type of bacteria that is normally found in the gut but can be overgrown. And everyone thinks that when you say Clostridia, a lot of people will go to something called C. diff, which is Clostridium difficile, which can be a type of infection. It can actually cause something called pseudomembranous colitis. But there are other strains of Clostridia that can cause significant symptoms, on a more kind of chronic basis.

If you did get an acute case of C. diff, you would certainly know it. You would have very difficult to treat diarrhea, pain, and even sometimes, bleeding, with the loose stools and you can get dehydrated and it can become very hard to treat. This is not what I’m talking about. I’m actually talking about other strains of Clostridia or you can actually have even a lower level kind of overgrowth of C. Diff itself that isn’t quite so serious. So the set of markers on the bottom looks at bacterial markers for Clostridia, too.

And then the next set of markers starts to look at some other things related to what are called the mitochondria. So the mitochondria are the powerhouses to the cells, the energy producers, right? The mitochondria are part of how we make ATP or produce energy. So I get a huge set of markers related to the mitochondria on this test. I also get a set of markers for something called oxalates. Now oxalates are in healthy foods. It’s not that they’re bad, but two problems can happen. One, you can be genetically set up to over-absorb oxalates which can create symptoms, or you can have some nutrient deficiencies that will increase your risk of over-absorbing oxalates from foods. And honestly, you can also just be eating a very high oxalate diet and not even know it.

So two areas where symptoms show up with high oxalates tend to be in the realm of pain in some way, shape, or form. It can be various different types of pain. And then it can also cause GI symptoms, more commonly diarrhea, and abdominal pain, than going the other way. It usually it doesn’t contribute to constipation, so I see more diarrhea in my high oxalate patients. And then the set of markers at the bottom are what are called neurotransmitter metabolites. So neurotransmitters are brain chemistries. So, these are things like looking at serotonin, dopamine, epinephrine, norepinephrine. So I do get a little bit of information on that. And there is a huge gut-brain connection. And so, a lot of times, especially when there’s an overgrowth of Clostridia, I can actually see disturbances in some of the neurotransmitters, particularly the dopamine metabolites. So that’s one example of how what’s going on in the gut can affect the brain and behavior.

And then there’s some other cool markers on here, there’s one in particular that I love, the quinolinic marker does tell me if there’s any kind of neuro excitatory, inflammatory process going on in the brain, and so it’s a really good marker for that. And then, next is looking at a huge panel of two things. One, nutrient metabolites. So I get a lot of the B vitamins. I get to see not only what levels are in blood when we check in blood work, but this kind of tells me how is your body doing utilizing it. And I also get other markers like vitamin C and CoQ10 and N-Acetylcysteine. There’s markers for glutathione in there. There’s a bunch of nutrient metabolite markers that are valuable information for me.

And then we also get a set of amino acid metabolites and we also get something called phosphoric, which can tell me about someone’s nutritional status, and also it is related to vitamin D status as well. So this organic acids test gives me a lot of information in one test, and it’s a first morning urine before you take any of your supplements. And there is a couple of days prep time of things to consider. There’s a few dietary considerations and some supplements you’ll come off before doing the test. But generally, those are the answers that I get, the results that I get. So I do the organic acids test when I think there may be a yeast overgrowth problem that’s not showing up in any other tests, like a stool study. I will do it if I suspect that there is disturbances in neurotransmitters, brain chemistries. I’ll also do it to look at the mitochondrial function and nutrient function. So those are the main categories of reasons why I will choose to do an organic acids test. This is Dr. Emily Parke, with your Functional Health Minute for today.

Read all of Dr. Emily’s latest updates to stay informed about ways you can upgrade your approach to wellness.
No spam, notifications only about new products, updates.
PrevPreviousCold and Flu Supplements
NextThe Importance of Performing a Stool StudyNext