Update on a Potential Supplement Regimen for Coronavirus 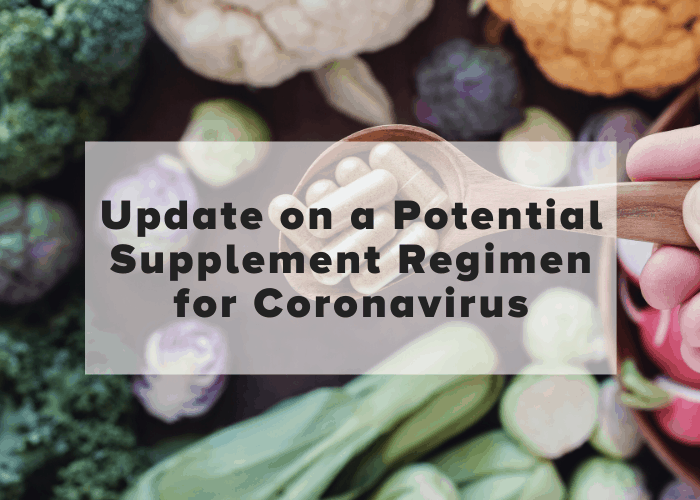 Here are some of my updates on supplements related to COVID-19 based on literature for other coronaviruses and current clinical trials.

Hi guys. Okay, so I want to give an update on supplements related to COVID-19. So as we know, this is a novel or new virus and so we’re making a lot of guesses and extrapolations. But I did find some interesting things in the literature for other coronaviruses like SARS and MERS, for example, that I want to share with you. So the two things I found that were kind of documented for coronavirus, COVID-1, what we have now with COVID-2, it was vitamin C and zinc. And so those were kind of very easy to find.

There is also a current clinical trial going on for high-dose IV vitamin C for those that have COVID-19 pneumonia. And I think that’s great. And I think all of us natural integrative functional medicine practitioners were already recommending vitamin C for pretty much any infection that’s going on. And that holds true here. But I did find an interesting study that involved about 250 students, and they were taking a thousand milligrams of vitamin C every hour for six hours when they started to feel ill, and it did help kind of improve symptoms and outcome.

So I’m going to mirror that recommendation and say that that’s probably not a bad place to start. And then every day after that first day, I would try to probably get in at least 5,000 milligrams total of vitamin C in divided doses. Because it does better in the GI tract when you split up the doses. And plus, vitamin C goes out of the blood relatively quickly. So it is good to take multiple doses per day. On the zinc, it really is zinc lozenges. And I would say sucking on a zinc lozenge and letting it kind of really hit the back of the throat every hour for the first … You could do the same as your vitamin C for the first hour to make it easy. And then after that you probably want to do at least a lozenge anywhere from three to five times a day after that.

Other nutrients that might be helpful. Additional vitamin D, because we know D is super important for the immune system and there’s been studies in low vitamin D and increasing influenza severity and symptoms, and so it only makes sense. D, I would add on the dose 5,000 IUs per day extra above and beyond what your baseline is. If you’re only doing it for a week or two, it’s likely going to go just fine, unless, obviously, you have liver or kidney disease, and then you definitely want to check with your physician on adding even just a little bit of vitamin D.

Then, vitamin A is also really great and important. There is good studies on A and other viruses, particularly the measles virus. There are some that it recommend even up to 100,000 IUs of vitamin A a day. I don’t know that you have to go that high, but nobody knows. So I would recommend maybe for the first few days doing no more than 50,000 a day, and then dropping down to 10,000 a day after that. So another great immune system support are, of course, probiotics, right? About 80% of your immune system’s located inside the gut, so definitely giving it good immune supportive, immune modulating substances like probiotics is really important. I would definitely recommend a combo of lactobacillus and bifidobacteria, about 30 billion. Especially if you’re new to probiotics, you don’t want to go too high. You can, if you’re already tolerant of 30,000, let’s say, or 30 billion, rather, then you can actually … You could go ahead and double that for a short period of time.

Next is something called N-acetylcysteine, or NAC. It probably is good for two reasons. One is it’s a precursor to glutathione, which is your body’s main antioxidant and detoxifier, and it’s also a mucolytic. So it does help you break up mucus. And the dose of that would be about 600 milligrams twice a day as kind of … if you started to get sick. Next is curcumin. Curcumin is the active extract in turmeric that is anti-inflammatory and it works on the immune system in about a dozen different ways. And so I think it has great potential to help calm inflammation and modulate the immune system. And I would recommend doses of up to three to 4,000 milligrams per day in divided doses. So you can take 500 milligrams every hour or two to get to that three to 4,000. I do think that it’s definitely an important one.

And then next would be omega-3 fish oil, or probably even better are what are called SPMs, which are these pro-resolving mediators that help clean up inflammation once it’s been kind of out and about. And I think that would be great. So fish oil, I would recommend doses, probably two to 3,000 milligrams total per day. Caution for those of you that are on any type of blood thinner medication at all, you want to definitely talk with your doctor on that. And then on the SPMs, those would be like two of those, so two twice a day, to really help kind of clean that up. Metagenics makes a great one.

And then next would be another recommendation that I haven’t really used too much in my patients. And that’s for something called PEA. And there’s good studies on that and influenza, and starting with anywhere from 500 milligrams twice a day. You can take it up to three times a day, so you can make your total dose a thousand or 1,500 milligrams a day total. And then of course, quercetin is also another great one that kind of just make sense. There is a great product that has PEA, quercetin, and luteolin all in it. It’s a product called SunBalance. So that’s what I’m going to be recommending.

And then there’s a couple of what I would consider topicals that I talked about in my previous video that I do think still make sense. And that’s the Biocidin Throat Spray, because the company actually did a study and it does improve your immune system response, your IGA, at the site. And that’s how the virus makes it in, right? Eyes, nose, mouth. And so I think the throat spray only makes sense. And then I also do Argentyn 23’s silver nasal spray. And I would do one spray in each nostril up to three times a day. Silver is antimicrobial and this is very low parts per million. It’s 23 parts per million, thus Argentyn 23, silver nanoparticles.

From what I have researched, that’s my, I would call, basic supplement regimen. And if someone’s really sick, instead of N-acetylcysteine, or rather in addition to N-acetylcysteine, I would probably recommend adding on some glutathione so that you’re not asking your body to make it, you’re just actually giving it. And so that’s where I’m at right now with my supplement regimen. There’s lots of other things potentially to add. There’s some herbs like astragalus. There is some nice products by Xymogen. There’s one called Viragraphis that has andrographis in it. There’s a lot of ways you can go with it, but this is kind of where I’m at. And if I do have a patient come down with it, those are likely going to be my recommendations. So remember that I am a doctor, but I am not your doctor. So please check with your trusted healthcare provider before starting to take any supplement regimen. I hope this was helpful.

Read all of Dr. Emily’s latest updates to stay informed about ways you can upgrade your approach to wellness.
No spam, notifications only about new products, updates.
PrevPreviousSupplements for Viral and Immune System Support
NextToxic Metals TestingNext