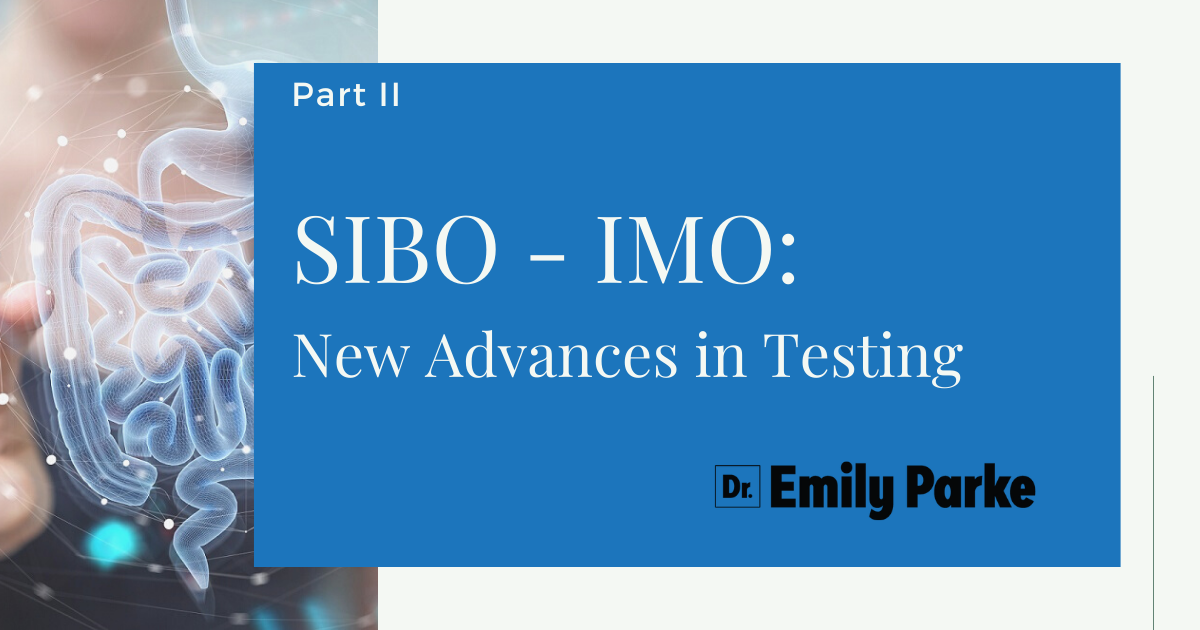 Today, I'd like to take a few minutes to talk about some newer types of testing that are out there to help properly diagnose SIBO or IMO.

Hi, this is Dr. Emily Parke with your next Functional Health Minute. Today, I’d like to take a few minutes to talk about some newer types of SIBO testing that I’ve actually been using in my practice for a while.

So traditionally in functional medicine, we have been using a three hour lactulose breath test, meaning you ingest lactulose and then you blow into these little tubes connected to these bags and it collects the gases that you exhale and tracks hydrogen and methane gases. So that’s the old traditional way of testing SIBO. By the way, you can also use a glucose substrate if someone is very sensitive to lactulose, it’s just that the glucose substrate doesn’t give you as full of a picture of what’s going on in the small intestine as the lactulose does. So you’re more likely to catch a positive doing a lactulose breath test than you are doing a glucose breath test.

So a newer version of the breath testing now looks at three different gases. So Dr. Mark Pimentel out at Cedars-Sinai, he’s kind of a SIBO/IMO/IBS guru. And I’ve been following him for years and he’s always doing good scientific university-based research on SIBO. And he pioneered a newer breath test that looks at three gases now it’s called trio-smart. And it looks at hydrogens and methanes like the old one did and also now it looks at hydrogen sulfides. So it looks at three different gases versus two, so that gives us more data, more information. Now, does it change what we do about treatment protocols? A little bit, and I say it like that because the hydrogen sulfide testing is so new, all of us are still kind of in process with what… And there are some things that help certain patients that do have higher hydrogen sulfides, like a low sulfur diet, for example and there’s a couple of other supplements and whatnot that we might add. But overall, this is a brand new way of testing SIBO. So even Dr. Mark Pimentel will say like, we’re still learning, we’re trying to figure out what the differences are and what to do about it.

The other test that he helped pioneer is actually a blood test and it’s called IBS-Smart. And what that tells us is if a patient has IBS from having a post-infectious process going on. What that means is let’s say someone got food poisoning and that was the last straw that broke the camel’s back and it creates an immune system response. It actually makes you make antibodies against certain parts of your small intestine that slow down the motility. And we know that motility is obviously a huge factor in SIBO. And so the blood test can kind of tell us, there’s two different antibodies that are tested on the blood test, depending on which one is high or both are high. Only one of them is high when you have an acute kind of illness going on, the other one can remain high for a period of time. And depending on how high it is will tell us how difficult it is to treat that case of SIBO specifically with motility.

So the reason to consider doing the test is if you do have that antibody that’s really high, we might be a little bit more aggressive with motility support. Now if you’re my patient you know that any SIBO treatment protocol we’re already doing definite motility support, and fiber and we’re doing some herbal prokinetics and in some patients we’re doing prescription prokinetics to help move things through the small intestine, as well as our SIBO treatment protocols. Whichever method or combination of methods we choose. We might be doing an elemental diet, we might be doing prescription antibiotics, we might be doing a non-prescription herbal antimicrobial protocol with lots of other supporting supplements in there. I’m going to have a blog coming out shortly about the details on what I’m kind of doing for SIBO treatment protocols and all the different parts there.

In this video, I really wanted to go over the two kinds of newest, latest and greatest tests that are out there to help properly diagnose SIBO. And that’s that Trio-Smart breath test and the IBS-Smart test. This is Dr. Emily Parke with today’s Functional Health Minute.

Watch Part I of the series here.

Read all of Dr. Emily’s latest updates to stay informed about ways you can upgrade your approach to wellness.
No spam, notifications only about new products, updates.
PrevPreviousEasy Foundations to Start Strong on the Ketogenic Diet
NextUpper Back Foam RollingNext