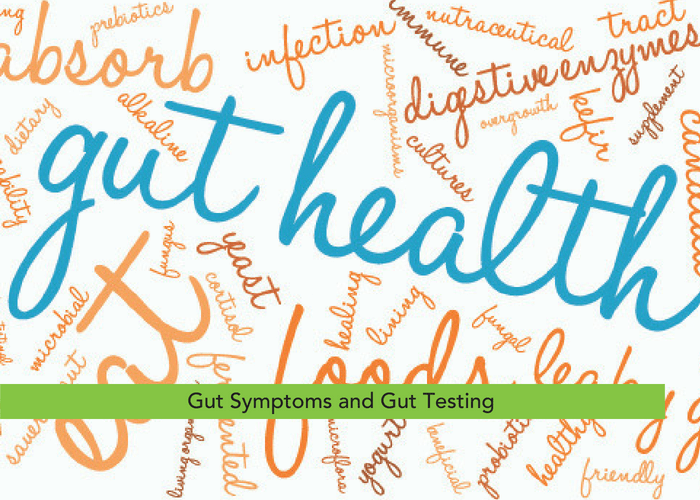 For this week's Functional Health Minute, I'd like to spend a few minutes talking about gut symptoms. About 80% of the immune system is located inside the gut. If we don't get right what's going on in there, we're going to struggle with lots of symptoms! So how do we test for these symptoms? Let me explain.

Hi. This is Doctor Emily Parke with your Functional Health Minute. Today, I’d like to spend a few minutes talking about gut symptoms. The gut is so important. As I’ve mentioned before, about 80% of the immune system is located inside the gut. If we don’t get right what’s going on in there, we’re going to struggle with lots of symptoms, not just gut symptoms.

There’s a few different tests we can do to really find out what the root causes of your gut symptoms are. Before we get into actual testing, I did do some previous videos on getting through a food elimination plan, and that’s the very first thing we’re going to do, because food sensitivities, food intolerances, food allergies, they’re just so common. Until you figure those out, if those are the root causes of your symptoms, how easy is that, right? You’ll figure out through that process what foods are causing your symptoms, and you’re not going to put them in your diet on a regular basis.

Then, other categories of things to test that could be going on, sometimes we look at a stool study. This is not just your typical stool study looking at is there an infection in there or not. Of course, we do get that information, but this also gives us information on how you’re doing digesting proteins, fats, and carbohydrates. It gives me information on inflammation markers inside the gut. It gives me a look at your good gut bacteria, your good microbiome, and it tells me if there’s other imbalances as in if there are overgrowths of some bacteria and/or yeast that are in there that are just out of balance, meaning they’re usually there in the gut but they’re just overgrown and can be potentially causing symptoms for you.

We also get a lot of other markers, something called short chain fatty acids, which are really kind of the food for the good gut bacteria and for the colon cells that are products of really vegetable fiber fermentation. We of course get other standard markers like if there’s blood in the stool and the pH of the stool, but that really does look at the colon, the large intestine.

The Role of the Small Intestine

One of the ways to find out if there’s something called SIBO, small intestinal bacterial overgrowth, going on in the small intestine is to do something called a breath test. It’s a three hour test, a long test, but very easy to do. You’re blowing into collection tubes every 20 minutes and we’re collecting the hydrogen and methane gases to see if either one of those is at high levels, meaning bacteria have overgrown that are producing either hydrogen and/or methane gases creating symptoms.  Typical symptoms of SIBO could be gas, bloating. There’s a diarrhea dominant kind, a constipation dominant kind, and I have patients that will go in between diarrhea and constipation also.

Then of course there’s something called an organic acids test, which is a urine metabolite test looking to see if there are overgrown things happening in your body, metabolizing in your body, for example like yeast. There’s nine markers that look at yeast and fungal overgrowth. There’s also a set of bacterial markers that looks at something called Clostridia. Clostridia is a bacteria that’s normally found in the stool, but it can become overgrown and imbalanced. I’m not just talking about C-diff, Clostridium difficile. There are other types of Clostridia that can be overgrown and imbalanced and create symptoms. Actually, some of the symptoms can be not even just gut symptoms, but neurological related because the Clostridia overgrowth can affect your dopamine production, which is one of your neurotransmitters in your brain.

This organic acids test also looks at things like oxalates. If oxalates levels are high, it just means that you’re retaining or absorbing too many oxalates into your body, and that can create symptoms of all kinds, two big categories, pain and gut. There are other symptoms that can occur with oxalates, but those are general broad categories that can create symptoms related to the gut. Then the organic acids test also gives us non gut related markers like mitochondrial markers for example, and it does give us about a dozen or so nutrient metabolite markers as well. Those are three huge ways to test, to actually do physical testing to find out what’s going on inside the gut.

Lastly, which I saved until the end, after we’ve done a good 30 day food elimination with reintroductions and have done other gut testing, that’s when I may do an actual blood test for food sensitivities. I wait until then, because until you’ve really figured out your food sensitivities and healed the gut, if you do a food sensitivity test up front before you’ve healed the gut, you’re going to have a test that comes back with all kinds of positives on it that really aren’t reflective of what you’re truly sensitive to. It’s just that because you have either a gut infection, an imbalance, something going on creating intestinal permeability or a leaky gut, all the foods you’re eating or the most common foods you’re eating leak through into your immune system, and then your body creates these immunoglobulins to them that show up on your test.

Until we’ve really healed the gut, a lot of the food sensitivity tests, I don’t find them very useful because you’ll come up with this huge lists of foods that you can’t eat. Then until you heal the gut, if you start eating other foods and do a food sensitivity test again, you’re just going to have a test that shows up with those foods that you’re now eating. The goal is to really get to the root, find the root cause, and treat that, and heal the gut so that you’re not quite so sensitive to many foods. If you’ve gone through that process and are still having symptoms, then of course a food sensitivity test may be warranted at that time, because it’s possible you happen to have a sensitivity to a healthy food, something that would never be on an elimination food plan, like broccoli for example or salmon, something like that that no one would ever tell you to eliminate on purpose as part of an elimination food plan that you happen to be sensitive to.

This is Doctor Emily Parke with your  Functional Health Minute for today.

Read all of Dr. Emily’s latest updates to stay informed about ways you can upgrade your approach to wellness.
No spam, notifications only about new products, updates.
PrevPreviousIs Toxic Mold Illness the Cause of Your Strange Symptoms?
NextWhat is the HPA AxisNext